Patrick Mahomes found Travis Kelce with an 8-yard touchdown pass in overtime of Sunday’s wild divisional playoff game against the Bills to send Kansas City to its fourth consecutive AFC Championship Game. There were 25 points in the final two minutes, which was the second-most in any game in the Super Bowl era.

There were four lead changes in the final two minutes of the 42-36 win, and Mahomes and Bills QB Josh Allen combined to go 50-for-81 for 707 yards and 7 TDs with no INTs. Allen’s rating was 136.0, and Mahomes’ was 123.1. The Chiefs will host the Bengals next Sunday at 2 p.m. CT with a trip to the Super Bowl on the line. Kansas City is the first team in NFL history to host the AFC title game in four consecutive years.

The final touchdown capped a thrilling, back-and-forth second half that began 14-14. Butker hit a 39-yard field goal and Mecole Hardman scored on a 25-yard run to give the Chiefs a 23-14 lead in the third quarter. However, Allen connected with Gabriel Davis for a 75-yard touchdown near the end of the third to cut Kansas City’s lead to 23-21. Butker hit another field goal in the fourth to stretch Kansas City’s lead, 26-21. But the Bills took a three-point lead with two minutes to play when Allen connected with a wide-open Davis, for the third time Sunday night, and then Stefon Diggs for the two-point conversion. That lead didn’t last long as Mahomes finished a five-play, 75-yard drive with a 64-yard touchdown pass to Tyreek Hill to put Kansas City back in front, 33-29, with just 1:02 remaining. The Bills retook the lead on their ensuing drive when Allen connected with Davis for his NFL postseason-record fourth touchdown of the game with just 13 seconds to play.

But after the Bills kicked off into the end zone, Mahomes was able to move the Chiefs into Butker’s range and set up his score-tying 49-yard field goal. That sent this all-timer of a playoff game into overtime where, after the Chiefs won the coin toss, Mahomes found Kelce for the win before Allen had the chance to touch the ball again. “We just ended up on the wrong side of maybe one of the greatest games in postseason history,” Bills center Mitch Morse said after the game.

“Those guys are hurt,” Bills coach Sean McDermott said. “We’re disappointed, we’re all disappointed. We’re all hurt, sick to our stomach. It stings. I’m not gonna sugarcoat it. It stings.” This is the second year in a row that Buffalo’s playoff run ended in Kansas City. The Bills were beaten by the Chiefs in last year’s AFC Championship Game, 38-24. 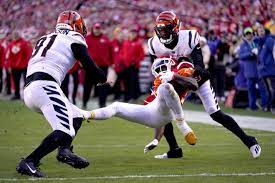 “It hurts,” Allen said. “You don’t like feeling like this, especially back-to-back years at the same place. So you got to find a way to get better and come back next year.” When asked after the game about what he said to Mahomes when Buffalo took the lead with 13 seconds left, Chiefs coach Andy Reid responded with, “When it’s grim, be the grim reaper and go get it.”